I am a professor at a university in Washington, D. C. I write and teach about the ways in which different cultures have thought about, and interacted with, outer space. I try to figure out why everything beyond Earth's atmosphere has mattered for people in the past, and how it might matter in the future.

I am also an avid amateur astronomer. I grew up under much darker skies, in rural Canada. From time to time, I still travel to national parks, in Canada and the United States, where the sky is so dark that the Milky Way casts shadows. The last time I tried to view the night sky in one of those parks, I was chased away by wolves. Perhaps fortunately, I'm usually stuck in light-polluted Washington, D. C. It's what amateur astronomers call a grey, or "Bortle 7," sky. I make do.

I believe humanity's future lies beyond Earth. To survive as a species, we will need to expand into space. And to get past the petty suspicions that always threaten our survival, we will need to think bigger. Looking up into infinity is a great way to start.

​I write this blog for myself. But if it gets anyone interested in space, so much the better. 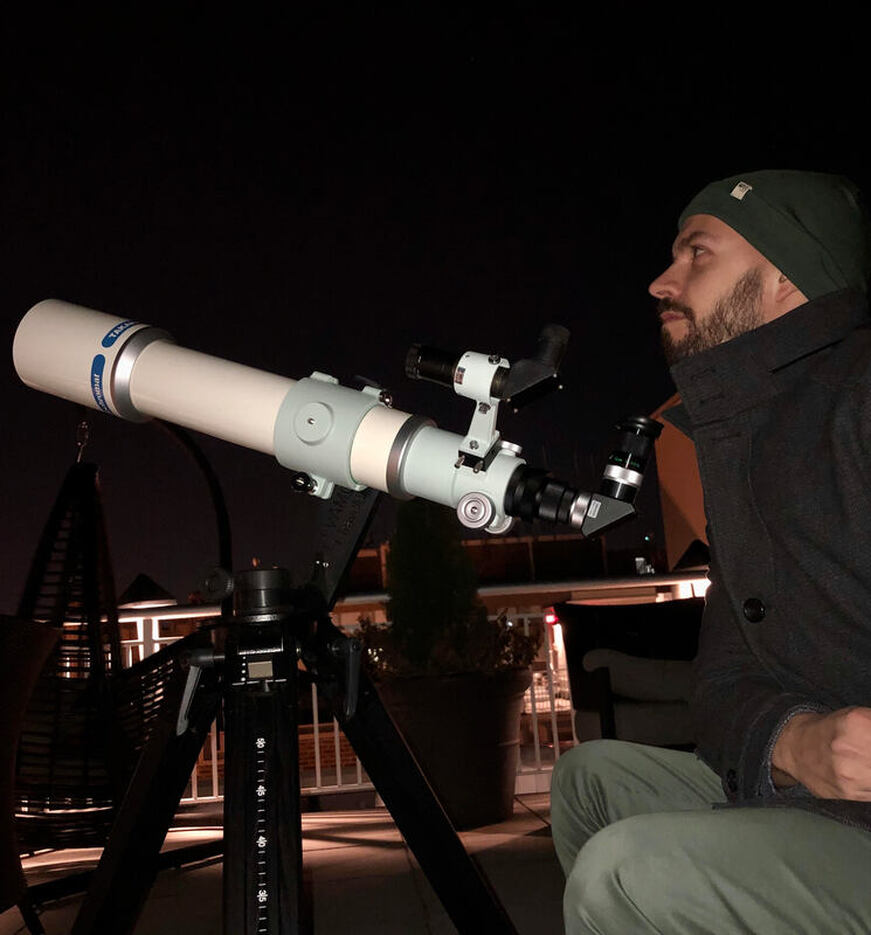 A cold night with my Takahashi refractor.

This is a simple journal of my observations and thoughts as an amateur astronomer. Its main purpose is to help me remember what I've seen and experienced. If you've run across this site, you may enjoy reading my impressions of planets, galaxies, and telescopes.

I have six telescopes: four in Washington, DC and two in Winnipeg, Canada. In Washington, I have to walk up or down a flight of stairs, and often at least 10 minutes from my apartment, to use any of them. I only very rarely have more than two hours to observe - and sometimes less than one. Since we are often under the jet stream, seeing is only better than average. In my DC telescopes, I therefore value simplicity, portability, quick acclimation, and a lack of central obstruction (which hinders telescopic performance in poor seeing).

In Washington, I use four excellent doublet refractors: a TeleVue 85, a Takahashi FC-100DC, a Vixen ED115S, and an APM Doublet SD Apo 140. These are among the lightest and most portable refractors in their size class, with wonderfully sharp optics that show exceptionally little false color (until recently, a common affliction of doublet refractors). I can attach the smaller refractors telescopes to a VAMO Traveler mount - a neat little piece of engineering from Switzerland - which I in turn fit onto a light but stable Berlebach Report wooden tripod. But the Vixen and the APM in particular work best with a bigger (but still compact), AYO II mount, and a somewhat bulkier Berlebach Uni wooden tripod.

As you'll read in these pages, it took me a long time to settle on this gear, and I had a lot of wrong turns along the way. These are expensive setups - at least for my standards - but they fulfills my every need while in or near the big city. Curiously, all of these refractors cost a similar amount of money, despite their very different apertures and similar optical and mechanical quality.

​I also keep a Celestron C6 and a tiny Celestron C90 telescope in Winnipeg, which I use with an Explore Scientific Twilight I mount. If you hunt for the right deal, you can get the C90 new for $120, and you can sell the accessories it comes with for another $50. That's $70 for a telescope that fits comfortably in a small backpack and throws up some really impressive planetary and lunar views. It's a great choice for a telescope I don't get to use much. Maksutov-Cassegrains like the C90 take a long time to cool down, but if you can wait they can provide excellent value.

Some amateur astronomers have far more gear, others far less. If you're looking to start in the hobby, I'd recommend picking up a few books. You might then start with a good pair of binoculars and eventually a small telescope. Many people encourage newcomers to get a cheap Dobsonian (that is, simply mounted) reflector, since it's easy to use and offers the most aperture you can get for the money. I can vouch for an inexpensive 3" or 4" achromatic refractor - a telescope you don't have to collimate or acclimate - while encouraging everyone to follow their own path, and to take all suggestions with several grains of salt.

With that said, here's some advice anyway: ​I'd strongly encourage newcomers to resist the urge to buy the biggest and most expensive telescope they can. ​The best telescope is usually the one you use most often - and that often means going small. If you do have the money, you're typically better off spending it on optical and mechanical quality, rather than aperture. Just remember that, in this hobby, you easily spend double or triple the money for a marginal improvement in performance.